Joey Ramone taught my daughter how to spell 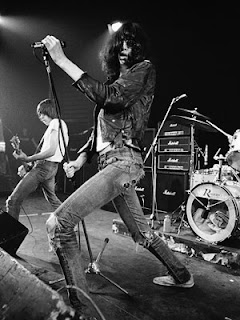 While driving around on errands, my youngest daughter sponteously shot out the following remark, apropos of nothing. (Apparently shooting out random remarks, apropos of nothing, is strongly hereditary.)
"Daddy, 'I..O' spells 'let's go.' That is very short. It is just two words. Actually, it is just two letters. I and O."
I gave my daughter the same response that people seem to give me when something random is just tossed out there. Namely, the non-commital, "Huh." It then suddenly dawned on me what was playing softly on the radio - Joey Ramone was in the middle of the chorus for Blitzkrieg Bop and was chanting, "Hey! Ho! Let's go!"
That's when it really struck me how impossible it is for us to control what our children pick up. Sure, KROQ is not necessarily the best pick as a 4-year-old worthy radio station, but I tend to balk at the idea that a child's world should be bubble-wrapped with only kid-friendly stuff. I like that kids pick up what they need and ignore what they don't. I also would point out that there is still some parental steering involved. In the radio station example, I might turn up the Owl City song and help them understand the lyrics on the very sensible idea that kids might enjoy singing about Fireflies. I will turn down NIN almost everytime, as I am not overly excited to teach my kids about animal fornication, especially not the way that Trent Reznor wants to teach it.
But it has to be acknowledged that our children have way more teachers than we like to admit. I think the way to handle this situation is to surround yourself with as many people that you respect and trust and help to emphasize and bolter those relationships as your child's ad hoc educators. It is a very traditional thing to buy a Christmas gift for your child's teachers. I guess this new way of conceptualizing who counts as a teacher means that the gift list just exploded. Joey, I have a $5 Starbucks gift card with your name on it. The hard part will be to get it to you. As for the rest of you, hang tight. I'll try to figure something out.
Posted by Todmund at 10:59 PM