Curling and the Suspension of Disbelief 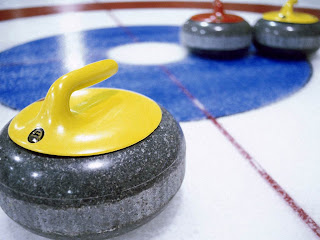 First off: Curling. I don’t think I stand a chance of explaining curling properly. That is the job of Wikipedia: Other people explaining stuff with the air of authority so that I don’t have to. But, to give you a quick overview, curling is a “sport” that was added to the Olympics as a demonstration event in 1998, but now is officially recognized with medals. A team of four people engage in what amounts to ice shuffleboard, using 42 lb. granite rocks, with the added complexity of brooms to sweep the ice. I don’t fully understand the brooms, but it results in having the team skip screaming, “hard hard hard hard hard” at the other, while the sweepers work with a cleaning frenzy that is both admirable and comical.

The name itself comes from the fact that the players are able to get the stones to curl and bend around each other on the ice, allowing the best players to almost magically place the stone into the tightest pockets and stop them on a dime. I have yet to see anyone make a stone hook around and travel back the way it came, but I keep watching hopefully.

So, this Olympic season, I was watching curling (and loving it) and my wife came in and sat down and started pointing out how ridiculous it is. I was uncontrollably and immediately jarred back into reality – it was like getting hit with a bucket of cold water. I had been sitting on the sofa a minute prior, absolutely loving watching the match, and here I was having the inanity of the sport pointed out in full and careful detail. And the shocking thing I realized is that everything that she was saying was stuff that I would (or have) said about curling.

I had always fooled myself into thinking that I was this incredibly rational being, who, while enjoying watching curling, still appreciated the ridiculous nature of it. I was just watching the sport ironically. But the reality is that that, in the moment, you really love the things you love, regardless how ridiculous they are. The same thing happens with good action movies with over-the-top action plots and with video games that are capable of constructing completely fleshed-out alternate worlds. Sure, after the movie, you turn to your friend and say, “Yeah, that part where they ducked underneath that pinwheeling car? Pshaw!” But during the movie? You’re saying, “DUCK!!! YEAH!!!” And you really mean it, both times.

So, unfortunately, I realized I am guilty of doing the exact same thing (throwing the metaphorical bucket of cold water to trigger disbelief) when my wife is catching up on her soaps or a movie on Lifetime. So, I make the following promise. “I will stop trying to guess who is going to die in the next Nicholas Sparks movie and will quit pointing out that spends very little time in a hospital and should actually be General Mafia. In return, please willingly ignore the glaring stupidity of the “sport” I choose to watch. And if you are extra nice, I will try to explain the new free guard zone rules.

Who is Nicholas Sparks?

Anonymous - seriously? You are on the internet RIGHT NOW. But I will help. I'll admit I was completely lazy with the hyperlinks. One has been added now. But the quick answer is - he is responsible for a chain of books (and then movies) with the following plot. A new person comes into town, strikes up a romance with a local, and then someone tragically dies.

From personal experience, it is also easy to accidentally get caught up in curling because it was so foreign to me, I was trying to understand the rules...
p.s. please tell Steve Quidditch is still an awesome sport even though everyone's efforts are made completely invalid once the Seeker catches the Snitch - after all, once in a while a team is so far ahead that the snitch-catching team doesn't actually win... *cough*...