I don't know quite when it started, but at some point I realized I was taking too many jabs at the expense of the French. Not that I think that anyone is above (or below) getting a jab, but it should take some work - it shouldn't just end up being an automatic reaction. I tried to switch it up into something more exotic and tried making fun of the Belgians for a while, but it was just a little too obscure. Plus, over beers it's hard to work in jokes for a government that makes Italy look stable.
I think it dawned on me that I had a problem when we were out to lunch, someone brought up the French, and the conversation silenced while all heads swiveled towards me, waiting for me to make an inane comment. To be clear, almost all my comments are inane. But they were specifically waiting for an inane comment about the French.
So, in an effort to break a bad habit, I'll be blogging daily for the next 30 days about "Things I like about the French." Your solicitations and input, as always, are welcomed and appreciated. I already have a backlog of a couple dozen things, but might need help rounding it out to 30.
(And, by the way, just because I am declaring French amnesty, please don't take this to mean that I am letting the French-Canadians off the hook. I'm not. I'm talking to you Québécois!) 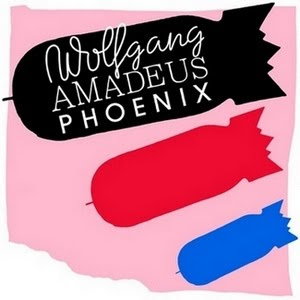 Day 1 - Phoenix
Simply said, this band rocks. You can check them out here, but if you listen to alternative rock, they are probably already a familiar sound for you, with such songs as Lisztomania and 1901. Of additional note is their lack of an accent. Not that I think that all music should be sung in English, but since I can barely talk in a foreign language, their ability to sing in one is outstanding. And lest you think I am exaggerating, I was given detention for my horrible pronunciation of taxímetro. And then, eventually, a "D" in Spanish 4.
Just to prove that they really are pulling off something impressive by singing sans accent, here is a clip of them accepting a Grammy this year. (fast forward to 1:00)
Thank you, France!
Posted by Todmund at 12:30 PM

Pretty meta Tod...claiming to lay off the French while pointing out that the insipid band Phoenix are in fact French...quite a low blow!! Can't wait to see how you continue your "appreciation".

Not really a fair remark. We've already established that my music taste in general is considered insipid. No irony was intended on my part. The fact that it ended up being ironic is entirely out of my control.