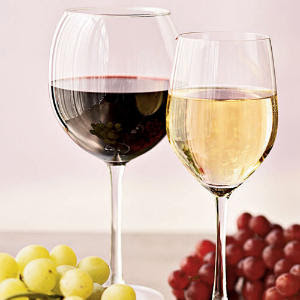 Day 14 - French Wine
The more astute of the readers may notice that some days have been summarily skipped. That's fine - that's the reward for being an astute reader. My hope is that the less than astute readers will not notice this at all and will say something to the effect of "but wait, the posts run seemlessly from Day 9 to Day 14." That is good - that means that my back-filling plan worked. How exactly I expect to catch up on a four-day gap is not entirely clear to me. Right now, my plan involves "off-shoring", "crowd-sourcing" and "building up traction." You might object and think, "Hey, that's nothing but buzz words." How I hate to burst your bubble. The internet is nothing but buzzwords. String enough of them together and you can create an entire industry. Don't believe me? Just watch. Start with text messaging. A completely useless phenomenon where teens and tweens devote over 40% of their brain cells to remembering that the "s" character is formed by pushing the "7" key 4 times. Then, that spawns all the time saving abbreviations which have actually made their way into the Merriam Webster dictionary, like lol and omg and ttyl and brb and then further onto kthxbye and zomg and rolflmao and whatever the crowd of Bieber-cut wearing youths have invented to make me feel old. But then that spawned Twitter. How much better to just send your text message to the entire world. How else is everyone going to know that that burrito is so good, lol! But, wait, we're only getting started. Why wouldn't we want to know where you are when you find that really good burrito? And that spawned Foursquare. Before you decide that this is all completely ridiculous, sit down and ask yourself what you said about Google six years ago. You probably said, "That company doesn't do anything - they just give me search results. They don't even have a web portal like Yahoo or Microsoft." Extra points if you ended that sentence with "LOLZ." And double extra points if you ended that sentence six years ago with "FTW." In fact, if you were saying "FTW" six years ago, please email me your stock picks. But the point is, Foursquare just raised $20 million dollars and is valued at almost $100 million dollars. All based on telling everyone that you just "checked in" to a TGIF (or heaven forbid you actually admitted to being at Applebee's). WTF? And Twitter hit the $1 billion mark LAST YEAR. WTF, indeed?
Now, the most astute of you will be thinking "wasn't he supposed to be talking about French wine? I am pretty sure he was supposed to talk about something French!" Well, as a ground rule, you shouldn't assume that labels mean anything. And you shouldn't think that focusing on form over content should mean anything either. Wait a second...maybe I am talking about French wine.
I am a big fan of California wines. And California wines would not be anything if not for the French. Indeed, almost all of the varietals in production in California are French and were stolen, snuck from, or otherwise removed from France and grown in California. I used to feel guilty about this, but not after learning how wine is treated in France and Italy - it is not the overly pretentious high-falluting (yes, I just said that...feel free to mark this down to torment me later) affair we often make it out to be in the U.S. It is more often a general appreciation of the artisanship and creativity of the local vintners. There is nothing any less (or any more) special to a bottle of wine than a good bottle of beer. Are there great bottles of wine? Undoubtedly so. But the point is that the French (and other European countries) can also enjoy the good bottles of wine as well, and do not feel it necessary to over-emphasize the great bottles at the expense of those good bottles. More recently, this has been changing in the U.S. and you can get a lot of good wines under (sometimes well under) the $20 price point, and that is good for everyone.
OK, so here's the tie-in for those of you whom I have lost. Don't feel like you have to understand or make sense of everything. Sometimes a good bottle of wine is just a good bottle of wine (and sometimes checking in on Foursquare or micro-blogging on Twitter is just that - good, not great). But, sometimes, just striking out to make something good that you love that is a riff on something that went before you can create a whole new niche that might be meaningful and world changing. I think that applies to both California wine and some of the new things that are just now emerging on the Internet. And I embrace both of them.
So, thank you France, for letting us borrow (steal) some of your grapes and continue in the grand tradition of wine-making and building on the tradition of those that went before us.
Posted by Todmund at 11:30 PM


I want to to thank you for this good read!! I certainly enjoyed every bit of it. I've got you book-marked to check out new things you post… gmail sign in

In place of devoted stay chat and telephone support; players at Slots.lv are greeted with an in-depth “Help Center”. You can watch video illustrations, learn by way of step-by-step guides, or join with workers and players by way of their devoted forums. Ignition has a downloadable poker app for iOS and Android units, however you’ll should spin by way of free slots using their mobile-friendly website. Luckily, 다파벳 Ignition mimics the performance we’d expect from a native Apple or Android shopper. To play in any of the slots video games you'll need to register for a Natural8 account and download the Natural8 app.