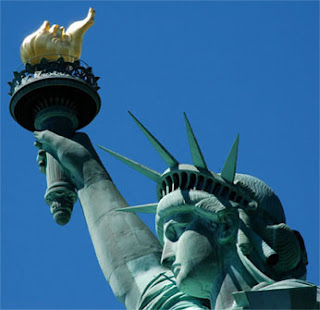 There are some gifts that I have to assume are given with a little bit of a twist behind them. Sometimes it is a hidden message, like getting a pair of running shoes from your wife or a new phone from your mom. But sometimes, I have to believe that the twist is a little perverse sense of glee when the gifter knows you are suddenly saddled with the maintenance. An Englishman might give a silver teapot knowing that he has doomed you to a lifelong battle with tarnish. A German might give you a cuckoo clock knowing that the noises might start to drive you crazy, but the battle to keep it running will likely commit you. An Italian might give you a Fiat Spider, but if he had any real interest in you getting anywhere, he would have just given you the aforementioned running shoes.

But the French gave us the Statue of Liberty. Sure, it is a beautiful depiction of Liberty Enlightening the World, and it represents a great friendship between two young groups of idealists that threw off the shackles of monarchy and strode free into the ideals of democracy. But it's also 62,000 pounds of copper. That's a lot of polishing.

Sure, it was intended to develop a nice coating of verdigris, but I still have to wonder if the designers secretly hoped that we might spend a bit of time polishing it. Fortunately, Americans are lazy. Inventive, but lazy. The disposable razor? 50% inventiveness and 50% lazy. I remember as a kid watching a TV show with a scene from an old fashioned barber shop. I had no idea why the barber was so busy shaving a leather strap when there was obviously a man waiting patiently to get a shave. I only really knew of two reasons for straight razors - to scrape of of my radio station's stickers off the window of my mom's car ("But Mom, people will think you're cool if they're driving behind you and know you listen to cool music.") and hysterically believed to be hiding in one if not several of the candy bars obtained while trick-or-treating.
So, it is actually with a little bit of sadness that I realize that laziness is currently winning out in the American dynamic when it comes to the Statue of Liberty. We have put men on the moon. We created hamburgers where the cold side stayed cold and the hot side stayed hot. Heck, we put both hot and cold together and figured out how to deep fry ice cream. I am pretty sure we know of a coating that can be applied to copper to keep it bright and shiny forever without any actual need to polish it. Inventive and lazy.
So, thank you France! And I apologize on behalf of my country for taking such bad care of it.
Oh, and if you want to see something inventive, see the shot of what the Statue of Liberty looks like in the alternate universe on the TV show Fringe. Very inventive. If I wasn't so lazy, I'd provide a link for you.
Posted by Todmund at 12:00 PM


Pretty portion of content. I simply stumbled upon your site and in accession capital to claim that I acquire actually enjoyed account your weblog posts. Anyway I will be subscribing on your augment or even I fulfillment you get admission to persistently quickly. hotmail login