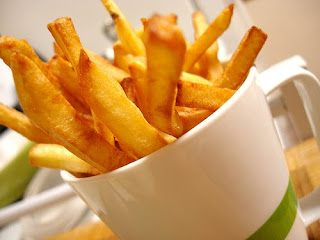 Day 2 - French Fries
First of all, they are delicious. Do you think America would have the health problem it does, or if the documentary Supersize Me would ever have been made if they tasted like oiled turnips? No, it wouldn't.
And I don't care that everyone is trying to rename them, calling them country fries, or steak fries, or even "Freedom Fries." We all know what they are - you can dress them up all you want and put on airs, but they are French fries, plain and simple.
And before you get pedantic and point out that they are actually Belgian and that the French don't call them French fries, but rather pommes frites, I would argue that both of those points actually work to make the French more awesome for making French Fries as follows:
1. Stealing an idea from someone else and making it yours. This is what America is all about, so when another country does it, we have to give them props. We don't talk about the first company to come out with an MP3 player, but rather the company who did a better job marketing it.
2. Not sticking your country name on a product within your own country. Quick, start thinking about food products named after countries. OK, what's the worst product you just thought of. You might have thought of English muffins. Those things are awesome. How the heck do they get all those nooks and crannies in there? Swiss Cheese? Equally awesome. I have to assume they are using some 4th dimensional wizardry to place the holes in the middle of the block of cheese. Spanish rice? Way better than white rice. Which brings us to American cheese. WORST. CHEESE. EVER. In order to get worse, you have to drop down to "cheese food" labelled products. So, in France they are called pomme fritte, but outside of France, they are French fries.
International marketing and screwing over the Belgians at the same time? Double bonus points! Thank you, France.
Posted by Todmund at 11:24 AM