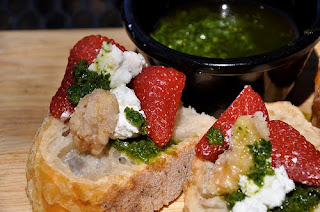 Day 4 - Amuse-Bouche
The term "appetizer" has to be one of the more horribly named things. In the simplest definition of the word, it would mean "that which appetizes." Now think for a moment to the appetizer section of the menu of your favorite local American restaurant. (I hope for your sake you didn't just think about Applebee's) I won't even begin to argue whether the menu items you're thinking of are tasty - they usually are. But I definitely have to argue that they are not "that which appetizes." Bloomin' Onion? Delicious, but that's got to be 4 solid pounds of batter. Chicken Wings? Quesadilla? Fully loaded Nachos? Again - all delicious, but all heavy, filling plates that could serve as your actual dinner order. Sliders? That's not even trying - now they're just shrinking down actual menu items and serving them as appetizers! Maybe long ago appetizers used to be something different, but nowadays they are effectively meals in themselves. You have to wonder if the people who write up these menus even had mothers, because every time I order an over-sized appetizer off their menu, I swear I can hear my mother chiding me with "You'll spoil your appetite."
But if you are told there will be hors d'oeuvres, you instantly know it is something different. Hors d'oeuvres and cocktails implies something completely different than appetizers and beer (Did you want to get the large, 22 oz. beer for just $1 more?). Hors d'oeuvres implies a certain level of sophistication and might actually act to stimulate your appetite.
And the amuse-bouche is the cooler, hipper version of the hors d'oeuvres. The phrase translates into "mouth pleaser" which comes off as ridiculous in English. However, it works in French. I'm not sure quite why, but it has a certain, um, I don't know what. Somehow they've shrunk down an hors d'oeuvres, tossed a little exotic flair on it, saddled it with a name that would be hard to live up to, and yet pulled it off. Some razor thin slice of meat wrapped around a hunk of cheese burdened with an eight-syllable name, speared onto a vegetable you are pretty sure you have never seen before and drizzled with a chipotle southwest black bean pesto southeast peanut sauce puree? I have no idea what I just ate, but it was delicious. And the only way you could possibly ruin your appetite with those would be if you could somehow get the constantly circulating waitstaff to stand still long enough for you to pull more than one off their trays.
Thank you, France.
Posted by Todmund at 9:33 PM

The Amuse-Bouche is usually served in finer restaurants. It is a gift from the chef... sort of a prequel to the food that is going to be served that evening. It's not something you pay for and is usually unusual and something that you probably wouldn't order if it was on the menu. It is usually one bite, full of flavor and creativity, and looks amazing. Personally I have tried many varieties of these and the most amazing was made by Hubert Keller when I dined at Fleur De Lys in San Francisco. I was considering becoming a chef at the time and decided to take a date there... mostly I just wanted to try his food, although dropping over $500 on dinner for two including a bottle of wine impressed the shit out of her. I still remember everything I ate there which considering how much I eat is quite a feat. The Amuse-Bouche he presented was a puree of lima beans seasoned perfectly with a small dollop of fine caviar and some creme fraiche. Very French. Although I love French food,I still keep in the back of my head what General Patton once said... "I would rather have a German division in front of me than a French division behind me."